Orgonomy: The Work I Do

I’m trained as a Reichian Orgonomist. I’m an Accredited Reichian Orgonomist, having received my training and accreditation from Dr. Patricia Frisch in her unique Method of therapy. My work is based solely on this therapeutic approach which was conceived and developed by Dr. Frisch, called her "Method."

Dr. Frisch’s Method seamlessly interweaves the theories of three of the most seminal, pioneering figures in the field of psychoanalytic psychotherapy: Dr. Wilhelm Reich, Dr. James Masterson, and Carl Jung.

Wilhelm Reich brings the understanding of the inseparable nature of the internal dialogue between our body and mind, each communicating to the other. Our body armor developed early in our lives as responses to the difficulties we experienced growing up. Our character armor is the corollary of the held patterns in our body and represents the totality of our personality, all aspects of how we think and behave. Our body armor and the personality that developed created what is called our “character,” thus the term “character analytic psychotherapy.”

James Masterson’s contribution to the Method is his work with very early developmental stages and the attachment ruptures that can occur during this time. These ruptures create unique personality disorders that can grow from the early attachment period, a theoretical position that Wilhelm Reich hadn’t flushed out in his work.

This integration of Masterson’s personality disorders created an update to Reich’s character typology. This is a profound addition which offers a much needed and fuller understanding of the breadth of characters that actually present in our therapy offices. This allows us to better address the needs of our patients with Dr. Frisch’s more inclusionary Method.

Carl Jung’s contribution is the understanding of the individuated Self. This Self is the life-long striving to wholeness, which incorporates our dream life as well, an often-neglected internal world that informs our lives with profound and healing images, stories, and symbols.

Dr. Frisch has created a holistic approach that guides the therapeutic process in a methodical way. The Method is a sophisticated and nuanced process which blends into a seamless therapy that covers all aspects of one’s life, from in-utero to death.

Wilhelm Reich’s talk therapy called character analysis has a component that includes working with the body. Bodywork is initiated as an adjunct to deep work on one’s character. It helps to reduce physical symptoms of distress and allows the opening and release of our vital energy. 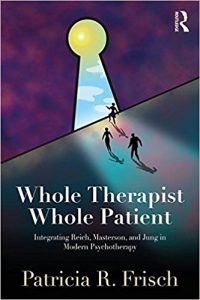 In 2011 I received my accreditation from Dr. Frisch after having completed her many years of training in both character analysis and the biophysical work. This unique accreditation allows me to bring the knowledge and experience to work directly on the body. Working on one’s body alone is insufficient and at times can be psychologically detrimental. You need to have someone to help you through the feelings that the bodywork brings up.

Through our sessions together, I will come to understand your character and can also then help you to integrate the depth of feelings that will surface during the bodywork.

Learn about Dr. Frisch's work and book on her site here.

Return to About Me
Return to Concepts